&quot;the Nanjing Daily&quot; the German industry 4.0 concepts proposed that organization Manager IPK, academician Uhlmann - - “the intelligent manufacture” is not equal to “the robot”

Combs IPK in Nanjing's footsteps, from achieves cooperates that one day, every two months have the new progress nearly: This June, under the Sino-German premier's testimony, the German Fulaoenhuofu Applied research Promotion agency and Nanjing signs "Cooperation Memorandum of Understanding", plans builds the Sino-German intelligence manufacture development facility in Nanjing; In August, the Sino-German Intelligence Manufacture Research institute completes; Yesterday, the research institute rather was signing a treaty the first cooperative project, and reached wholesale the intelligent manufacture upgrade protocol with the south auspicious group.

Uhlmann disclosed that at the world intelligence manufacture conference, they will also open the exhibition region, demonstrated that one batch of industry 4.0 research and development achievements, very many technologies are make an appearance for the first time in China. In the Uhlmann eye, the German industry 4.0 makes between 2025 with China, has same also has the difference. China makes one of 2025 targets enhances the productive forces, links the manufacturing industry and the Internet, stresses in the large scale production. But German industry one of 4.0 cores is implements take the client as the core has custom-made the production.

Now some enterprises fall into the erroneous zone, delimits the intelligent manufacture and the robot the equal sign, thought that “the Unmanned factory” is the intelligent manufacture ultimate objective, actually this is one-sided. What appearance is the German industry 4.0? Take a workshop as the example, produces on the chain link to have many computers, each computer may implement the communication, the sensing, may the extracting information, the self-analysis, mutually between form “the intelligence to consult” the function, the worker may also participate in between computer's consultation, finally everybody together according to the client demand, resolved nimbly how the production process should change.

Uhlmann said that the German industry 4.0 was not said did not need the worker, but was must achieve human and computer's perfect harmonious cooperation. The human is the higher wisdom biology, can the rapid reaction, make the resolution, “the factory does not need the human” this idea to be obsolete, as early as Germany proposed in 1980 on some people, but afterward confirmed this was an error, the manufacturing industry cannot remove the human in outside, is controlling especially, its function is the computer cannot replace. Regarding some low technique content's worker, the industry 4.0 will provide the support to them, the intelligent terminal may help them to carry on the work in the complex factory environment, the computer can help them to make the resolution. 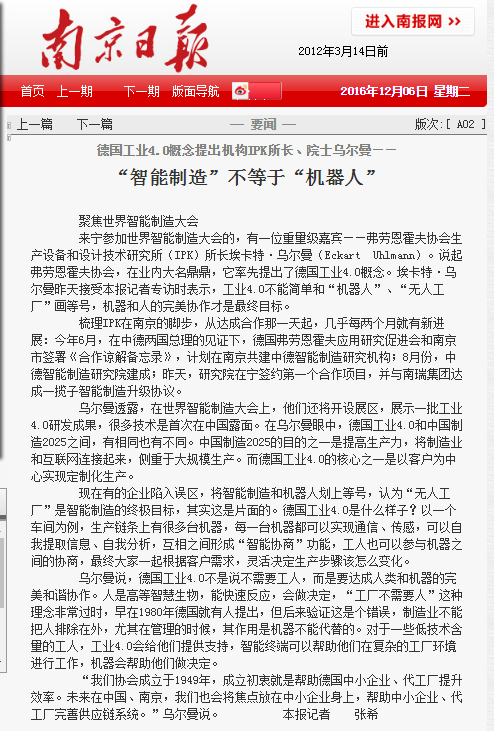